A-Rod: If You Cannot Be A Good Example, You Can Always Be A Horrible Warning 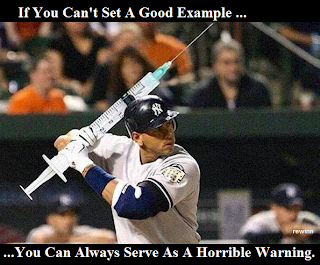 This guy has amazing talent and a huge income. He will never know physical hunger or lack anything he really needs. He's nearing the natural end of being at the top of the game, and can decide to keep at it but admitting a slow decline, or leaving and going on to more success in a related field, such as sportscasting.
Or he could run for public office.
Or he could write a book.
Or he could go on permanent vacation for 80 years and live of the income from selling his likeness on cereal boxes.
But instead he uses banned drugs.
As if he thought no-one would notice!
This cheats every other player who was honest. There may be other reasons to ban those drugs, but cheating other players is high on the list - it's a total failure of character.
This is not as tragic as a person who through no fault of their own dies or is mutilated or even loses their puppy.
But is is sort of tragic: he did it to himself.
And so his future, while never involving poverty, will not involve honor; this choice of him will also cost him a heck of a lot of money. Let's hope people notice
As The Lovely Wife likes to say: If you can't be a good example, you can always be a horrible warning to others!

Just a Couple of House-Painting Fools! 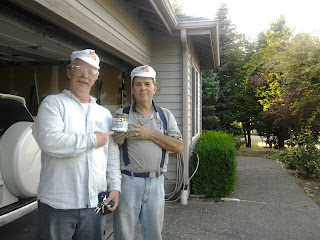 My brother Dan's painting a house, as a side-job. He likes to keep active!
There's a few spots for which is absolutely needs an assistant; that's me - I'm the dumb labor. And I'm great at dumb labor.
I won't say that I'd like to do this all the time, or even a lot of the time. But some of the time, it's just nice to pick things up and put things down and move them all around. It's also very satisfying to see your work get done!

A visit from old friends! Debbie Boudanis, Jennifer and Jillian.

Today Debbie Boudanis, who I knew from Springfield, had a layout in Seattle on her way from Florida to a new job in Alaska. She wanted to give her cats a rest, so we let them sit on the bedroom while Debbie, her two daughters who were also in town, and I had a quick tour of West Seattle. I'm afraid was not well prepared to be the mapreader since I'm so used to driving around here, but I think we managed to see a few sights and they seemed grateful that the cats got the rest.
I hadn't seen them in 15 years, and it was nice to see that my old friend is getting along. When last I saw Jillian she was probably 3 or 5 years old, and Jennifer maybe 10 or 12 - it's not surprising, but still amusing, that they are able and active adults. Time goes by! They all took off around dinnertime, and I hope to see them again, perhaps in another 15 years.
at 11:24 PM No comments: Links to this post 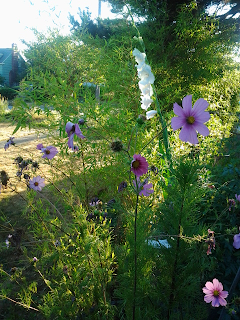 I am surprised and happy with the success of planting flowers from seed this year. I think one difference from the past is that I'd usually just gone with whatever old packets I had around, and they weren't very fertile. This year I planted a new packet of cosmos and some new gladiola bulbs and they all came up - spectacular and fun!

I'll still put any-old seed into the ground in odd places, because I like the semi-random results, but for spots that I want to be really sure I'll get something, I guess I've seen the proof that it's worth it to get fresh seed.
at 11:42 PM No comments: Links to this post

Voting in the primary 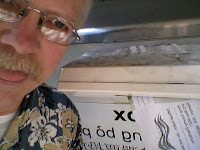 I had a dental appointment downtown Tuesday, so I took the opportunity to drop off my ballot for the primary election. Partly it's because I like to save a stamp, partly it's because I enjoy the ritual of slipping the ballot into the box.
Getting a selfie of me doing this is awkward, especially since my phone likes to reverse the image when I do it!
at 11:36 PM No comments: Links to this post

As we walked home from Big Al's on Sunday, we passed a house we'd seen many times before, which had a metal Seahawks chicken in the front. This time there was a guy there, so we greeted him and expressed our appreciation for the art.
He said he son made it and was next door working on his smoker. We looked, and there he was - we had a long talk about his welding and his smoker and a lot of stuff. It was very neighborly and if anyone wants another giant Seahawk chicken, or a meat smoker/barbeque for an event, this is the guy to try!