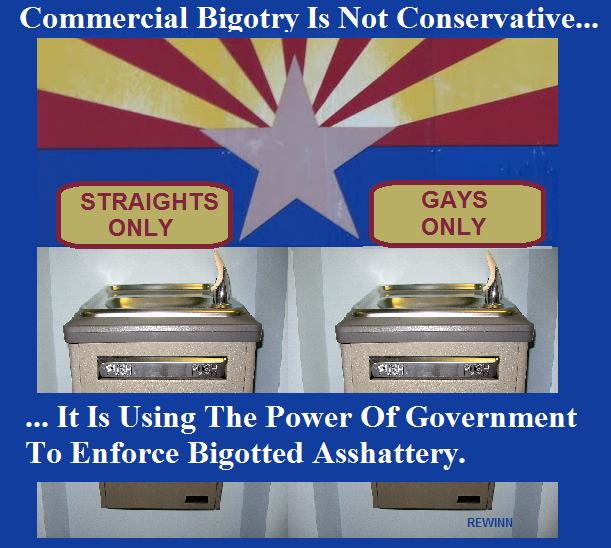 Asshats in Arizona have passed a law authorizing Commercial Bigotry: the practice of businesses refusing to serve customers who come into their stores, cash in hand, on the basis of race, sex, or any other characteristic disfavored by some religion or other.
Traditionally, American conservatives have opposed laws making this behavior illegal, citing freedom as a principle and also claiming that the invisible hand of the market will disfavor those who discriminate so eventually it'll go away anyway. That this has never happened, and in fact that there is a positive market for commercial bigotry, doesn't stop some conservatives for making this argument.
However there is a deep and abiding reason modern conservatives are simply wrong to support the "right" to commercial bigotry: discrimination in business is made possible only by government action.
Think about this for a moment. If you want to discriminate in your personal life, and not associate with blacks, whites, Jews, Christians or left-handed people, that's your business and nobody's talking about changing that. But if you're running a business and want to turn away customers who come into your store cash-in-hand, you need to have government intervention to help.
The most obvious ways that government is needed to enforce commercial is in the use of police to eject peaceful customers asking for service. Lunch-counter sit-ins are probably the best known historical example; blacks who came to Woolworth's with money in their pocket were refused service based on the "freedom" of the store owners to practice commercial bigotry; the store owners' ultimate recourse was to call the police to employ state-sponsored violence against the customers.
But there is another way in which government intervenes to empower commercial bigotry: the business license. A business license is fundamentally an agreement by government to limit the liability of a business investor to the value of the business; there are other elements as well, such as tax advantages, but for the purposes of analyzing commercial bigotry, the most important aspect of a business license is that if a person running a business harms a customer, the customer cannot sue the person, but must sue the business.
An example may make it more clear. If you bake a cake for a friend, you can discriminate all you want. No cakes for Jews, no cakes for Christians - it's your own business. But if you accidentally put rat poison in the cake, the neighbor you gift can sue you and take your house as compensation.
In contrast, if you get a business license and bake the very same cake, and have the very same accident with rat poison, your customer cannot sue you personally and take your house as compensation; your customer can only sue your business and take the business' assets as compensation.
This feature of limited liability (the "LL" in "LLC") is essential to modern business. It didn't really exist much at the time of the founding of the United States, but it grew up under operation of law because it makes it possible for investors to create large enterprises. Without the government agreeing to limit liability, most businesses would cease to exist.
So limited liability is an essential features of a business license. To gain this great advantage, what mus a business give in return?
We The People have decided that, in exchange for a business license, we demand two things. First are some minimum reporting requirement, and perhaps a fee for processing the license. But second, and more important, We The People demand that businesses don't act like asshats. Civil rights laws bans commercial bigotry is banned in our United States because We The People, who issue the licenses, want something in return.
This is a conservative argument. No-one is forced to get a business license. If you don't want to run a business, you don't have to. You are free to do anything else you want; bake as many cakes as you want for who-ever you want.
But if you freely enter into the bargain of applying for a business license, you can and should be held to the agreement underlying the license.
So if you want to be a bigot in your private life, that's your own affair. But if you freely agree to get a business license, you are agreeing not to be a bigot in your commercial practice.
What could be more fair, from a conservative standpoint, than this?
at 9:54 AM No comments: Links to this post