Congratulations and Thanks to Big Al Brewery 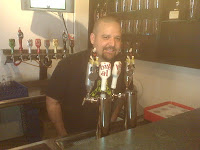 This weekend we stopped by Big Al's Brewery ("Live Your Dreams, Drive Ours") about eight blocks away, to help celebrate its 2nd Anniversary. That's Big Al himself, both in the flesh and, if you look closely, sitting on the taps!

This is a working brewery; it has a nice party room upstairs but mostly there's the brewery out back (where we never go), a tap room out front (comfortable but not over done) and the lot out in front, with chairs and wooden wire spools for tables. Bring your dog if you want, it's relaxed and friendly!

I used to never drank beer, probably because I kept trying the cheap stuff you get at parties and my entire being said "No!"  Then I got a little bit of the good stuff and, thanks to a helpful metabolism, the rest is history. (What's helpful about my metabolism is that it likes 1 beer but not 2; the 2nd beer just doesn't taste good. But the first beer: ah, wonderful!  So I am both a cheap date, and awake at the end of the night to drive home or clean up.

Recently we discovered we don't even have to drive; we can just walk down there to fill up our growler (a half-gallon reusable bottle) from their taps. What a convenience! And all of a sudden, bottled beer no matter how hoity-toity, just isn't all that great anymore; nothing is like beer out of a tap, and now we can get it any time we want! The price is close enough to the cheap stuff at the package store as makes no difference.

So thanks, Big Al's Brewery, for being a part of our community! Brew long and prosper!
at 9:05 PM 1 comment: Links to this post