I Voted Today: For America, Against #Romnesia 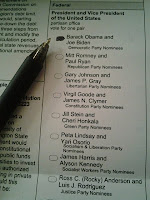 I was happy to put my ballot in the mail today.


Most of the contests were pretty easy to decide.

There were plenty of down-ticket races, and I have to admit I don't really know one judge from another, so I mostly went with the Progressive Voter's Guide.
at 9:56 PM No comments: Links to this post 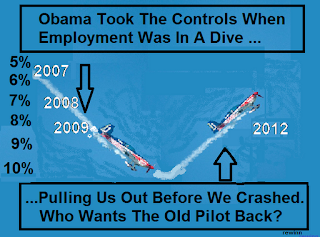 Let's not forget that four years ago, our economy was in a power dive straight into the ground, losing 700,000 or more jobs every month.
Obama may be criticized for many things, but under his leadership we are now gaining 100,000 jobs a month and more. Why change pilots now?
Especially when the other guy thinks it's a good idea to keep exporting jobs; he not only is opposed to ending the tax breaks that help pay for job exports, he denies that there exist any such tax break, which is an obvious lie: any businessman knows that business expenses are deducted from income before calculating taxes.
For example, when Bain Capital cruelly forced workers at Sensata, in Freeport Illinois, to train their Chinese replacements, Bain could deduct as a business expense the cost of flying the Chinese workers to America, housing them while here, and sending them and the manufacturing equipment to China. In effect, American taxpayer subsidized the export of those jobs. Isn't that crazy?
I think we should stick with the guy who's turned us around from a negative 700,000 jobs a month to a positive 100,000 jobs a month.
at 7:11 PM No comments: Links to this post

The whole Binders Full Of Women thing is amazing. 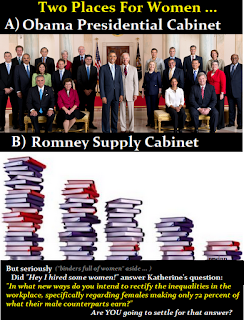 Happy Thought: #Obamacare Means You Can't Be Dropped For Getting Sick 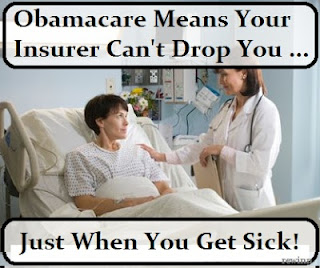 It used to be that if you got sick, your insurance company had the chance to drop you when you got too expensive. Yearly limits and lifetime limits were buried deep in the contract. And of course, if your insurance was through your employment, it's not as if you could negotiate the terms anyway.
That's changed, thanks to Obamacare. Even if an insurer starts losing money on you, they can't drop you.
Insurers who wanted to "do the right thing" were at a disadvantage; their competitors could be more profitable by dropping people when they got sick. Think about that for a minute: the system was set up so that people who wanted to do the right thing would be flushed out of the marketplace!
Let's think about what a good thing this is, for us as individuals, for our families, and for our nation!

More Such: http://4freecle.blogspot.com/
at 2:41 AM No comments: Links to this post

This is Fall Cleaning Day, and my first job is vacuuming the air ducts in preparation to turning on the heat.
The  slowest part of the job is taking off and replacing the duct covers. They're just held on with screws, but over the years, screws must have gotten lost and replaced by whatever was on hand, because there are hardly two that match. This doesn't matter much, since no-one really notices, but it does slow me down to be switching constantly between flat-bladed screwdriver and Phillips wrench.
Then Brilliance Struck - like a hot fist to a cold brain!
"Why not have the two screwdrivers battle royale, and let the victor rule!" thought I.
The Battle:
I set up the arena and decreed: "Two enter, one goes out!"
The Phillips wrench struck first. "Pick Me!" it said. "My self-centering design is clearly superior; as long as you maintain axial pressure, the tool will never slip off the screwhead!"
"Pick Me!" reposted the flat-bladed screwdriver. "I can double as a pry for the covers, when it's time to lift them!"
In the end, I gave thumbs-up to the flat-bladed, because I had an extra flat-bladed screw to work with.
The Economics:
I clean the vents and ducts every fall and plan to do that for 30 or 40 years.
If having a single screwdriver saves me 1 minute of time, I've just added more than half-an-hour of useful time to my life, once I subtract a few minutes for having made and implemented this decision. Unfortunately I have chosen to spend about a third of that time blogging about it; I won't start actually profiting from this move until about 2022. Perhaps I'm beginning to understand how the situation arose in the first place.
Next Year:
Revenge of the Phillips Wrench!
at 2:18 PM No comments: Links to this post