Let's Give Earth A Hand!

Happy Earth Day!
Remember, we get only one - so don't screw it up!
at 5:30 PM No comments: Links to this post

Taking the Hand of God Over the Book 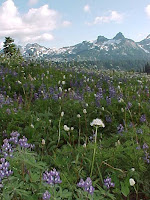 There is a form of idolatry which consists of worshiping the text of the Bible.

I have seen this idolatry in several internet discussions of Evolution and the Bible. It is really quite remarkable; the Bible Idolators express fear that if their personal and very literal interpretations of the text is not factual in the way they choose to understand it, then something awful will happen: God will cease to exist, morality will dissolve, and life will have no meaning. Or something even worse.
It would be funny if it were not sad.


There is a sin called "Giving Scandal" that we were warned against in the Seminary. Basically, if you persuade people that you have some special knowledge about holiness or goodness, and then lead them into error, those people may decide that everything you have said is wrong and abandon a perfectly reasonable faith because of your bad actions. In my observation, Bible idolators are prone to giving scandal because no reasonable person can accept Genesis as being historically or scientifically accurate, but some people insist that it must be taken so.

Folks, let us be reasonable!

The Hand of God is most Evident in His Creation. Holy Books may be inspired by God but they are written down by Men, copyed by Men, translated by Men and preached to you by Men. Even with the best will in the world, error creeps in. This is patently obvious in the stories of Genesis but there are other obvious problems, as in the contradictions in the Christmas story or as to the fate of Judas. Pointing this out enrages Bible Idolators, who have spent a thousand years coming up with ever more strained interpretations of the text in order to avoid the obvious: these are stories, to be minded for wisdom, not histories or books of science.

In contrast, consider the Laws of the Universe. These are the Direct Works of the Hand of God.


Now, I'm not entirely clear as to what that "Hand" may be (...quite obviously, this is a metaphor ...) and I don't especially need to know what that Hand may be. It suffices to know that we exist, therefore it exists, and there is no real need to go further as to proof. We have more important issues, such as morality, ethics, and finding some dinner.

When it comes to questions of history and of science, we can have no better guide than the Hand of God: nature itself. God has set up an immense Puzzle that we call the Universe, and one of our tasks is to figure it out. God gave us brains to figure it out with, even though it seems very probable that the task will take a very long time.


Some religious organizations don't like this thought. Tough nuts! Organizations are built by men, and prone to the corruption of men (...and of women too. Let's give equal time for corruption ... ;-) It's understandable that organizations would prefer we rely upon them for knowledge but let us not mistake them for God.

The crux of the issue is this: You must decide, when there is a conflict between Science and the Bible, which one of these choices is more likely:
The proud answer is to worship the Book and accuse God of being a Trickster; the humble answer is to let all that be, and just take the Hand of God
at 8:59 AM No comments: Links to this post

I wanted a composting system without spending any money. I'd heard of sod houses, so the thought arose: why not use sod to build the walls of a compost heap?
My neighbor had recently cut back the turf that, over the years, had encroached on the public sidewalk. It lay on the parking strip for a couple of weeks drying out but not decomposing, and slowly killing the grass under it. No-one objected, so I decided to do something with it.

Several wheelbarrow loads later, we have a U-shaped structure of sod walls: 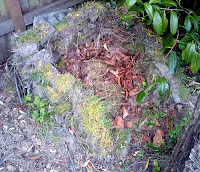 Notice the cinder blocks between the east wall and the wooden fence. My mother-in-law suggested, wisely, that we wanted to protect our fence and I had a few blocks lying around.

I started the heap with a layer of needles raked from our yard, added a little yard waste. As the heap grows, I suppose I may need to reinforce the sides with more sod, but I like the idea of having living walls!

This is an experiment. I can't think of why it would not work, and it is certainly economical. The worst outcomes would be that the compost would convert to dirt slowly, or that the entire thing might collapse, but neither outcome is especially bad, since we can always spend money and buy lumber to build a more formal heap.

Meanwhile, I'm growing a compost heap!
I don't know how well this will work.
at 10:33 AM 1 comment: Links to this post