J.S. Bach, "Bourrée," from the Suite in E Minor for Lute, featuring Col. Coleman and Ian Anderson!
at 11:00 PM No comments: Links to this post 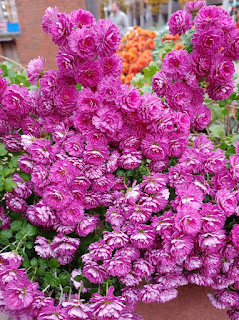 I pass by these many times a day, as I take my breaktime walk around the building and often when I go home. I just noticed them as I looked for images to post.
at 4:00 PM No comments: Links to this post

Thursday Dance Against The Dark

The season of darkness is upon us, and with it the impulse to huddle indoors and ignore people. This is something I accept in myself and do not so much fight as subvert - and always with good results.
Today I had some bogus excuse for skipping Zumba, and I was making up excuses as I went. Class was fun as usual and I assume I was getting the health benefit of an hour of excercise when suddenly - right at the midpoint - I was seized with a bout of intestinal distress that demanded attention.
I grabbed my stuff and ran to the bathroom. Afterwards, as I washed my hands I reflected that, well, I had made an effort and come to the gym, so I should head home and skip the rest of class. I actually had my coat on when I realized that this was just the dark weather talking, and that I would enjoy and benefit from the rest of class.
I headed back and had a great time, chatting briefly with a friend. But that's not the best part.
As I walked to my car in the very light rain, I encountered a woman with a dog. The dog eyed me and I stopped politely. I prefer to let dogs set the terms of the meeting. The woman apologized, and I said it's all right, I like dog, and then she started talking with a man sitting down next to a small handrailling. I had not noticed him! He was obviously in distress - cleanly dressed with no obvious injury but he was sitting on the ground in the dark, in the wet, slurring his words. We helped him stand and asked if he was ok. He replied not very coherently and stood not very stabley. There was no smell of alcohol but the woman later told me she thought he fell and hit his head on the railing or something. We suggested we go inside and he didn't seem to process that. I asked the woman to go get help at the front desk while I stayed with him.
After a minute or two, he blurrily asked for help walking so I put his arm over my shoulder and helped him walk inside. We were met by someone on the staff who came with the woman. When the man sat down inside, she put on plastic gloves and started asking him questions. The woman and I left; she told me they were getting a lifeguard to check him out.
I suppose this is the best result that we could have gotten.
If I had skipped class I don't know how they would have gotten the man into the building.
So life wins again!

Email ThisBlogThis!Share to TwitterShare to FacebookShare to Pinterest
Labels: health 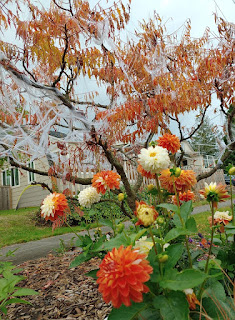 My neighbors Marcia and Wendy maintain such a wonderful parking strip full of plants. The whole neighborhood enjoys!
This is the first year that I recall the tree getting dressed for Halloween. It really works well with the orange dahlias (or are they mums?)
at 6:30 AM No comments: Links to this post

My first comment on Trump's announcement he was awarding the 2020 G7 to his own resort, the Trump Doral, was a quick comment to a statute someone else pointed out to me: 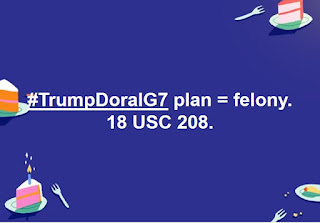 The Emoluments Clause is all very well, but it's hard to enforce. A clearly written statute is much cleaner.
Later someone said that this law applied only to employees and officers, and not to the President. I feel there is a valid argument that the President is an officer of the government (after all, Chief Executives are generally regarded as a Corporate Officer) but it's a pretty moot point since he'll never allow prosecution of himself. Read the law for yourself:  https://www.law.cornell.edu/uscode/text/18/208

Later, "AboveTheLaw" posted a quick rundown of the likely federal procurement law violations. Somewhere someone would go to jail for this, if not Trump himself (again, the AG is his poodle)
President Trump Is Violating More Than The Emoluments Clause With His Doral Summit


I did a little research on the Doral and Miami International Airport. Just looking at the map it would seem to be a major disruption which of course Trump would not care about but Floridians and travelers just might remember at election time: 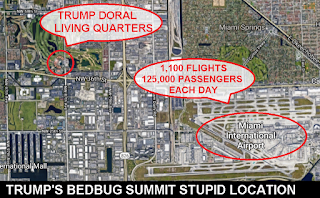 Next Tuesday I am giving a "20x20" speech: 20 slides, 20 seconds each.
I had hoped to re-use my "What I learned" speech, as it would surely be better with someone else controlling the slides.
BUT
What I am finding is that humor takes timing
It's just not funny in the 20x20 format.
I can force it but that's awful.
The worst part is the end; recapping 3 points in 3 slides works when I can go 1-2-3.
But when I have to give each 20 seconds - thud!
--
Oh well, I still have time to compose and deliver "Daily Beauty" ...but that must wait til Friday.
at 9:13 PM No comments: Links to this post 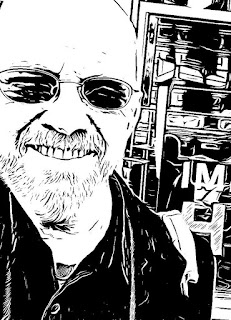 I took this photo October 3, 2019 by the Impact Hub in Seattle, while waiting for the Middle Eastern Legal Association of Washington annual event. On the bus into work October 16th I was playing with photo filters on my cellphone and decided I liked this black-and-white rendition. It's fun! People made Walter White comments which just goes to show that although I don't watch TV much, I do try to keep up with cultural references.
at 6:30 AM No comments: Links to this post

Email ThisBlogThis!Share to TwitterShare to FacebookShare to Pinterest
Labels: me 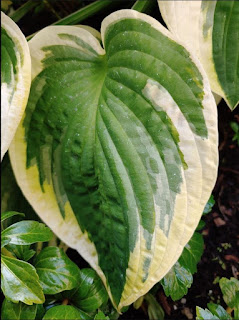 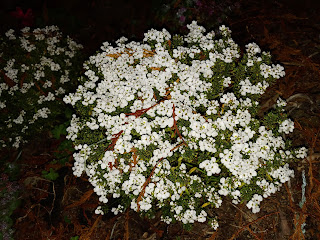 These are so small they are easy to overlook

Indigenous Peoples' Day 2019: Love Knows No Borders
at 10:30 AM No comments: Links to this post

My big goal for today is to set a plan and then follow it.
I do a lot of things and I accomplish a lot of goals, but an honest evaluation of my efforts is that they would be more effective if I would plan better. I can make lists and priorities and even GANTT charts and so forth, but actually sticking to the plan is difficult as I am easily distracted.
So.
Today my plan is to

Let's see how that works!