Friday: More of the same

Keeping busy is both easy and necessary in working through so great a change in life.
I really haven't had time for a beer, between preparing for my job interview Friday morning, the Great Switcheroo, and so on. Of course the cats need attention too; Michelle in particular might be concerned because she was used to sleeping with Kris. The other thing with Michelle is that she is grossly obese; she's always been big, but things are now way, way out of control. Steps Much Be Taken.
at 11:00 PM No comments: Links to this post

The plan is for me to inhabit the upper floor, while the college students inhabit the basement. One of the students spent most of Thursday moving boxes; the Yellow Room functions as a warehouse or staging area for emptying the basement bedroom and main room.
Then I'll move into the Green Room as the students move into the basement - with an intermediate step of a badly needed basement carpet cleaning.
This has been of great interest to the cats. The long term residence seemed concerned, so I deployed all the remaining catnip.

While I was driving around making money, Ginger brought a rented van to load with Kris, Kiara and Nessa. I got home in the late afternoon and Kris had her stone face on; I had  assumed this was just because it was stressful for her, but I am to she had three beers for lunch, so no surprise there.
She's gone. She left behind a robe ostensibly to comfort a cat but looked to me symbolic. 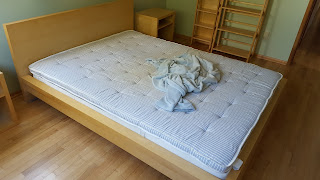 You cannot build a house on a foundation of alcohol.
at 11:00 PM No comments: Links to this post

Tuesday: In Which Kris Moves Out, Or Rather Predictably, Does Not

Today was the day that Kris and an army of movers was going to take her stuff to her new apartment.
I had arranged to be elsewhere, working on a variety of odd jobs. I suppose I could have stayed around to monitor the process, but really, why? It's only stuff, and if something left that I wanted to keep, I can replace it. Balance that against the complications of a potential conflict and the pain , really, it's a no-brainer: just be elsewhere doing something useful.
As it happens, Kris had not one anything to prepare for the move except make a mess in the kitchen and then go to bed. She had taken no time off work and expected my housemates to pack for her. In the middle of the day I got frantic texts from her and then calls, because the mortgage had come out of her bank account - as it was supposed to, right up to the time that she moved out.
Well, she had not moved out. So she's supposed to make the payments.
I had offered generous terms of rental until she moved: she had refused. So now the predictable was happening, and *I* was the a-hole.
I was working but her increasingly upset texts and completely unprecedented calls upset me. I am not supposed to care any more but you can't just stop. I knew she was in distress, and that it was a completely just distress and of her one making changed nothing.
So at last I answered a call.
The root of the problem was that she was (predictably) short of money. She had pissed away this years tranche of the inheritance from Larry, as well as her regular salary, and of course no-one would help her - certainly not her mother, not the men chasing her ass, not the women who agreed that I was such a bad person. Only I could help her, or should or would or whatever.
I had intended to let her solve this on her own, but I had made the mistaken of accepting the phone call. She cried. I have always loved that voice, and I can not bear that sound.
So I solved the problem. And I don't want to hear any more about it.
---
It helped that earlier in the day I got noticed of a job interview from the Post Office. I have high confidence that I will fit in there, and now that I have a family that cares for me, working there will be fine. I have meaning and purpose in life which work directly supports. It's just a question of going through the procedures for acquiring that job, and figuring out how to do it well. When I had worked there before, I had taken the job as a form of giving up, but now I am taking it as a form of succeeding. This makes all the difference; the health problem I had had will not recur.
---
I had not expected my housemates to be packing Kris' stuff, but she wasn't doing it and they wanted her out so I guess that's all right. Looking back, she was not very helpful with the move into this house either so I guess it's fitting that she's not completely helpful with moving out. I suppose she has some important drinking to do with her mother, so everyone is having their priorities satisfied.
It's a strange story, but at least it's mine.