The story of the Klondike Gold Rush is a natural for cartoon history, for mere words can scarcely convey its outsized and outlandish events and personalities. Props to author/illustrator Curtis Vos for 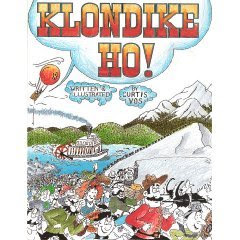 , a lighthearted but educational work graphic novel-style history.
Children will enjoy this book's outrageous stories and amusing drawings of Soapy Smith, Klondike Kate, and so many more! Adults will enjoy the majesty and irony of the larger story embedded within the many anecdotes. Teachers should offer this book to pupils who aren't finding history interesting.
Did I mention the useful maps and Bibliography?
If you enjoyed (and learned from) Larry Gonick's Cartoon History of the Universe, then you will be sure to enjoy (and learn from) this work as well.
Klondike Ho! information:

...LOOK at these happy couples. Help save their marriages from being destroyed by the government of California.

My friend Jon the Hobbit, who has sung in church choirs for several decades, offers "The things that run through a visiting singer’s mind when he attends an unfamiliar church’s services":

A few observations from my biannual (Easter & Christmas) sojourns with the Catholics:

Overall, since there isn’t really a sermon, the extra time is filled with music, so you sing at least twice as much as in an average Protestant service.

Catholic music tends to be gloomier than Protestant music, especially the week before Easter, so you’re going to want to do something to lighten your mood. I suggest gathering a group of your favorite children and dying eggs. Get silly, please!

Catholic Communion is “members only”.

The choir loft is at the back of the Catholic church, where the priest can keep an eye on us. Does this indicate a basic distrust of musicians?

The grander the church, the more tortuous the climb to the loft.

It's probably wrong to refer to Processing as "walkies".

I thought that it was unnecessarily cruel to chant "Stay With Us" as the congregation was leaving Maundy Thursday.

They've turned out the lights. Are they going to tell "Holy Ghost" stories?

The priest has started going about the church, sprinkling everyone with something. NOW I'm glad I climbed all the way up to this loft.

Whatever you do, don’t laugh if the visiting priest accidentally steps into the Baptismal pool.

At least this year the priest didn't almost set himself on fire when he lit the barbie.

The Priest said something about the Israelites being made to drink bitter waters. Is that how they invented having coffee after church?

The Presbyterian Pastor called a meeting of the Congregation right after the Service. That means I get first crack at the cookies!

It’s probably wrong to argue “Predestination” with the church secretary when you’re trying to book their church for a concert.

The Episcopalians love to parade even more than the Catholics. Everyone processes in, everyone processes out, & in the middle of the service they line everyone up & process to communion, so there’s no avoiding it.

The Episcopalians seem to have their services conducted by committee. By this I mean that there is more than one person up front & I’m not sure who is in charge.

Never ask the Adventists about the “Great Disappointment”.

Compassion is Good for You

In the spirit of the holiday, let me point out that my previous post in no way reduces the compassion I feel for Dick Cheney.

Compassion is good for you. Anyone can feel compassionate for good people; it's feeling compassion for evil bastards that's really hard.

So let's have compassion, in this holy season, for every lying turd that betrayed our great nation, sending thousands to their deaths so he and his buddies could profit. It'll give your soul a workout!

But compassion doesn't mean being stupid; do not buy land downstream from his grave.
at 11:30 AM No comments: Links to this post

DC - The National Park Service announced today that, responding to popular demand, it is preparing rules and regulations for pissing on the grave of Dick Cheney.

"It's important to remember," said a spokesman, "That Cheney does not have an actual grave at this time, since he is not dead. However, public interest in pissing on his grave makes it increasingly urgent to have plans in place."

"Ordinarily, we do not encourage urinating in public places. However, Cheney is so universally hated that we see no practical way of keeping it from happening, and have decided instead to regulate it as any other recreational activity."

Once the final resting place of Dick Cheney is determined, NPS will conduct hydrogeological studies to determine the likely drainage. "This is an important health measure," said the spokesman, "Remember, the grave will house the rotting remains of Dick Cheney, a heavy load on the wellbeing of whatever community it curses. We may have to install a large septic field as it is. Charging a small fee for pissing on Cheney's grave may be the only way to recoup those costs."

Sceptics claim that NPS is simply seizing an opportunity to profit from the burgeoning piss-on-Cheney's-grave industry. "The first day my webstore was up," said one young entrepreneur, "I sold over 1,000 bumperstickers saying 'Piss on Cheney's grave? Hell yeah!". Now the government wants in on this? As Dick says, "F*** You"!"

Others cautioned NPS against excessive regulation. "We're talking about an expressive activity," said a First Amendment expert. "Our forefathers, were they alive today, would be lining up to piss on Cheney's grave."

Current plans call for limiting pissers to a few hundred a day, charging a small fee for maintenance and upkeep. Children under 12 will be free, but dogs and other urinating animals will count as an adult. "Will someone brings in an elephant to piss on his grave?" chuckled an NPS employee. "I hope so. Ever see one of those cut loose? We may have to close the place for the rest of the day!"

The rare Seattle Snowplow was sighted today on 3rd Avenue, between Wall and Vine, by a few sharp-eyed and very surprised Seattlites.

"We all thought they were extinct," said David Swinson Maynard, "Certainly there has been little evidence of their existence this winter. So to see one, bold as brass, actually plowing snow was, well, it was like the old days again."

Newcomers to the Seattle area may not realize that snow comes so rarely to Seattle that it is treated like an endangered species. "Snow's natural enemies," explained Seattle mayor Nickles, "such as salt and snowplows, can drive it from its natural habitat in our streets. This can have serious consequences, such as a reduction in minor accidents and the reduced burning of gasoline as vehicle take efficient routes to their destinations. Our streets serve four-wheel-drive vehicles and front-wheel drive vehicles with chains; everyone else can just stay home."

Compounding the problem is the fact that runoff from Seattle goes into Puget Sound, which the city considers a fresh-water arm of the Pacific Ocean. "If salt from Seattle goes into Puget Sound, it may change from fresh to salt water," explained Nickles. "We prefer to use sand, because it is not only protective of the snow, but also clogs sewers and damages wildlife."

As a consequence, snowplows and salt are used rarely in Seattle. The sighting of a snowplow on a downtown street in Seattle was therefore a cause for celebration.

"Seattle's police and emergency vehicles are all rear-wheel drive," explained one EMT. It was pretty tough responding to emergencies by taking public transit."

But some have doubts even now. "Many streets are closed due to snow, and you say there's a snowplow out there?" scoffed an onlooker. "Yeah, sure ... and it's driven by a Sasquatch, right?"
at 9:38 PM No comments: Links to this post

Email ThisBlogThis!Share to TwitterShare to FacebookShare to Pinterest
Labels: Seattle

My favorite fictional holiday is "We Love The King Day" from the original version of Sid Meiers' great Civilization game. It turns out there are lots of fictional holidays in video games, from Star Festival to Life Day!

Any Excuse For A Party Is A Good Excuse! and here's seven more excuses! | digg story
at 10:33 PM No comments: Links to this post

Match them up, boys and girls:

1. An official website for communicating to the incoming Obama Administration your ideas on how our government and nation could change?

2. A social network site for developing, discussing and promoting ideas on how our nation should change?

3. A site promoting underwear, which can be a useful thing to change?

Dot Gov and Dot Org address a common problem: how can citizens make our government work?

Voting alone is not enough; participation in elections is only a start. The actual act of governance is key, but it's hard to participate. Letters, phonecalls and emails can get lost in the flood of millions of one-way messages, from us to the political leaders we hire on our behalf. Few of us can afford the time away from work and/or family to knock on the White House door.

The web can change that process by radically dropping the transaction cost of citizen involvement in government decisionmaking. How this works in practice remains to be seen, but it costs very little to try to influence our government on important issues. It is to the credit of the Obama Administration that it is trying to increase citizen involvement, and it is not surprising that a private effort is being a bit more nimble in actually getting discussion going.

The incoming Obama Administration has an innovative website which (in theory) makes it easier for individuals and small groups. How this works in practice remains to be seen but it costs nothing to try to influence our government on important issues.

Go to http://www.change.gov; within that site are various topics. You can click around to the ones that interest you, use the search feature, or go directly to a few that I've listed below.

Then ... and this is the IMPORTANT part ... click on the "Submit Your Ideas" box to share your ideas. And get your friends & family to do the same.

Don't be shy. Working with our fellow citizens to tell our government what to do is what our nation's Founders envisioned!

Topics I suggest you try

Please note I am NOT telling you HOW you should think on these issues; it's just my opinion that you SHOULD think on them.

Change.gov has some great features, but it's not as terribly interactive. It's like a very efficient email system, that let's you read the Obama team's position on various issues and submit your commits & ideas.

Another approach is the privately-developed http://www.change.org. This is FAR more interactive, in that it lets you suggest issues and then promote them with other people anywhere in America.

For instance, check out the Issues Page. You can suggest a cause, but more likely, any cause you're interested in is already listed by some like-minded person who just got here first. You can join the cause, use a variety of facilities to discuss a cause, share information with a variety of tools, organize activities in support of (or in opposition to) the cause, and so forth. No doubt one of the activities might be to petition the incoming Obama Administration on your cause ... making change.gov's functionality a subset of that of change.org!

Let me close this discussion of the top 3 change sites with my favorite videos on change:

spread the news at digg.com