The Military Spouse JD Network is an organization to support military spouses who pursue a legal career. Billing itself as "A Bar Association for Military Spouses", MSJDN:
Lawyer-spouses of servicemembers face exceptional barriers to practice, since they are frequently obliged to move from state-to-state. Imagine having to take the bar exam every three or five years! And then there's the problem of building a practice, maintaining CLE requirements, and so on.

These are real problems, but they are solvable and MSJDN intends to solve them. MSJDN includes military spouses from all branches of the United States Military, as well as spouses of retired service members and legal and military organizations who support our mission. Membership is FREE, just register HERE. 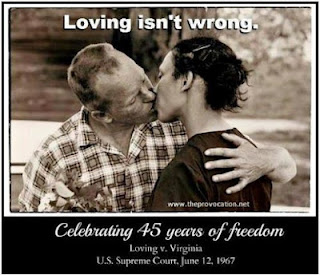 June 12 is the day that laws against interracial marriage were declared UNCONSTITUTIONAL in a case called Loving v. Virginia!

Yes, that is not a made-up name.

Richard and Mildren Loving were sentenced to a year in jail for the crime of being married while of different races ... but Loving Won Out!

It is still a cause for celebration; the struggle for equality continues, but don't we deserve to celebrate victories?

Here's the case ... it's still worth reading:

APPEAL FROM THE SUPREME COURT OF APPEALS OF VIRGINIA

Email ThisBlogThis!Share to TwitterShare to FacebookShare to Pinterest
Labels: cle

Charlie White, the Republican Election Chief of Indiana. was convicted of vote fraud by a jury of his peers. His boss, Republican Mitch Daniels, tried to help him keep his job overseeing the voting process by negotiating the crime down to a misdemeanor; that way the convicted vote fraudster could keep supervising voting WTF?

When that failed, it was clear that White could not have legally won the election because he was not legally registered to vote and therefore not legally eligible to run. Daniels however maintains that he must have won (and therefore, contrary to the jury's findings, was actually registered to vote legally WTF?). This matters because since White didn't actually win, the guy who came in 2nd gets the office, and Daniels doesn't like him.

Ann Coulter registered to vote using the address of her realtor, not her actual home address, and then she cast a vote based on that address (...she also applied for a driver's license using the realtor's address... a separate crime.) Florida refused to prosecute her until after the statute of limitations had passed.
She also faced accusations of vote fraud in Connecticut but those seem to have gone away after the state decided to ignore the evidence.

Mitt Romney registered to vote from an address in the unfinished basement of an 8,000 square-foot Belmont mansion owned by his son Tagg. Mitt did not live there and has never lived there. He then cast a vote in the 2010 election based on that registration. This is a clear violation of Massachusetts state law governing who may register to vote in the state. Read more: http://articles.businessinsider.com/2012-04-20/politics/31371937_1_ann-romney-massachusetts-governor-residency#ixzz1xS1vfJA6


So far, the people demanding the purge of voter roles don't seem to be using these cases to advance their cause. Why is that?
at 8:34 PM No comments: Links to this post

The Crimewatch gang on our block put our sign up today at the corner of 13th Ave SW and Henderson. Thanks Guys!
We know the crimewatch works because, last month, when our roofers came back for a last day of tinkering with the photovoltaics, someone called them in as potential burglers. This was encouraging ... it shows people are watching and caring ... and it was amusing ... the roofers said that sort of thing happened "all the time".
Our block is really good at keeping an eye out for each other; we have a variety of work or business schedules, so any time of day there's always someone around. This makes life a lot easier and more relaxing; you can't put a money value on that! Plus, it's fun to get together and share the news.
at 1:33 PM No comments: Links to this post