BBC's "Last Chance to See" made a star out of this randy parrot ...

You can help this happy bird! Start by sending a friend one of Sirocco's internet card for conservation: http://www.sirocco2010.com/

...which incidentally ties in nicely with this week's Change the World Wednesday challenge:


This week, send at least one electronic greeting card to friends and/or family (imagine their smiles). Then, come back here and share your favorite e-greeting link. I'll start you off with my favorite: Care2 Free eCards.

A Penny for Your Banker Holiday Proposed

One penny out of every dollar spent in the United States of America in 2009 went for salaries and bonuses at Wall Street firms, prompting demands for a new federal holiday.

"We awarded ourselves $140 Billion in salary and bonusses in 2009," explained one investment banker, "That's about 1 percent of the $14 Trillion U.S. GDP. An accomplishment like that deserves a federal holiday. We call it 'A Penny for Your Banker Day!'"

Pundits cheered this accomplishment, "Every time you buy a 99 cent hamburger, what happens to that other penny?" one asked. "Don't worry, it's not lost! One way or another, it will end up safely in the pocket of a Wall Street banker!

"For example, if you spend $100 on groceries, a dollar of that goes through a complicated network of financial finagling to the people who helped collapse the economy. If you spend $10,000 on a used car, that's $100 for Wall Street - almost enough for a champagne lunch or half an hour with a moderately-priced hooker. If George Washington gets a holiday for something he did over two hundred years ago, why shouldn't Wall Street bankers get a holiday for something they're doing right now?"

Congress is expected to act quickly on the proposal. "There's an election in November," said one campaign manager, "And we all know that a happy Wall Street banker is a generous Wall Street Banker!"

(Even Fox News is boggled by the bonusses)
at 4:00 PM No comments: Links to this post 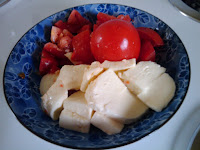 The key ingrediant to this quick, no-cook meal is a loaf of fresh Mozzarella cheeze. This is NOT the same as the stuff you might get in a block or shredded in a bag to put on pizza; it's softer, looking perhaps like pure white bread dough. I'll admit, when I first heard of this stuff, I was sceptical but one taste turned me around.

I get loaves of this at Costco, because their quality is fine and the price unbeatable, but a lot of stores carry it now. Last year, the Cheese Festival at Pike Place Market feature a guy making it from scratch and, reportedly, 5-minute-old fresh Mozzarella is an entire quantum level jump into transcendant realms of tastiness!

But for us mere mortals: cut up the cheese into one- or two-bite sizes. Cut some tomatoes to about the same size; use tomatoes that emphasize flavor rather than shippability for this (it's only half-a-pound of them, so splurge on a nice heirloom tomatoe if you can!) Sprinkle a little green herbs on top, preferably whatever you have fresh from the garden or, in the winter, your windowsill: chives, cilantro, whatever.

This is key: arrange nicely on a dish! It costs nothng and adds so much to the fun.

Some people like to sprink a little sea salt or kosher salt on top. This definitely makes the taste more intense, at the cost of higher sodium. Check your body's needs and proceed accordingly.

Your wife will be pleased and happy that you've made her a quick dinner that didn't heat up the kitchen. For extra credit, add a side of sliced hard boiled eggs (you always keep a half-dozen boiled eggs in the fridge, right? right!) and some artichoke hearts (from that handy large Costco jar.) You are well on your way to cooking studery, with a minimum of effort!

Today's report was inspired by this week's Change the World Wednesday challenge:


"This week, plan an oven- and stove-free day, and no cheating and going out to eat! Have sandwiches, cut up fruit, veggies with dip, leftovers from a previous dinner .... Plan ahead and make a pasta salad you can eat cold for a few days. Have hummus, feta cheese, and spinach on a pita or wrap. There are tons of healthy, delicious meals you can have without having to turn on the stove! As an added plus, many of the meals are quick and easy to prepare!"

Due to the "leftovers" option, this was not a terribly difficult challenge as written; we typically cook a large meal on Sunday and then enjoy leftovers for a couple of days before freeing the rest (our freezer has three kinds of soups from as many weeks. If there's every a power outage, we'll we eating a lot of soup!)  However the challenge did help me realize that some of our favorite meals involve no cooking, or more precisely, no more cooking than went into preparing the goods before we got it. (I must ponder the energy impact of enjoying fresh tomatoes in the winter; they had to be shipped from somewhere other than my garden but somehow canned tomatoes would just not be the same!)

Anyway, even without the energy savings aspect of no-cook cuisine, this fresh mozzarella-and-tomato combination is so darn tasty that I really wanted to share it. Enjoy!
at 3:38 PM No comments: Links to this post

Email ThisBlogThis!Share to TwitterShare to FacebookShare to Pinterest
Labels: Change the World Wednesdays, ctww, food, Green, how to, money

The Arrival: More Than Words

A unique, creative and compelling approach to art of telling a story makes Shaun Tan's "The Arrival" a must-read.

Its hero is an immigrant, presumably part of the great migrations of the late 1800s and early 1900s. In trying to understand the hero, we modern readers are hampered by our ready knowledge of our life into which immigrants come: the buildings, streets, foods, animals, customs and above all the language which is ours. We may intellectually appreciate these are different for a "stranger in a strange land" but how can we actually empathize or understand their viewpoint?

Tan's graphic novel solves this problem with sepia-toned images that evoke photographs of the immigrant experience, but brilliantly drawn as the immigrants themselves must have experienced it. Walls, windows and statuary have strange shapes; foodstuffs and the stay animals of the city have functional but odd forms; and of greatest importance, every bit of language (documents, newspapers, street signs) are in an alphabet that we cannot in the least bit understand. There are no English-language captions or word balloons to help the reader; like the immigrant, we must pause and puzzle out what is going on.


I am powerfully reminded of the times I walked foreign streets with little knowledge of the local tongue (but I must mentally subtract international symbols and guides.) Does the door in this wall lead to a restaurant or a private house? Do you eat this thing or wash with it? As in Tan's book, the strangers I met were usually helpful but the whole experience was a constant puzzle; and unlike the immigrant, I had a ticket home.

Theorists of the graphic novel, from Will Eisner to Scott McCloud, emphasize that sequenced images draw the reader into the story by requiring the unconscious filling of the gaps between the images. Tan's work takes this one step further; while he is far from the first to require the reader to fill in the meaning of uncaptioned images (having been anticipated, perhaps, by Cro-Magnon cave artists), Tan draws the reader into the same meaning-generating exercise as the story's hero. Wowza!

In this state, we readers feel our way through the hero's journey. He seeks lodging, a job, friends and ultimately to be re-united with his family. The story would be well enough if told through conventional verbal narrative, but in Tan's innovative form, nearly every scene, and most especially the finale, build empathy as no mere words can.

This book gave me a deeper understanding of immigrants, and it was a fine story with great art, too.
at 9:48 PM No comments: Links to this post