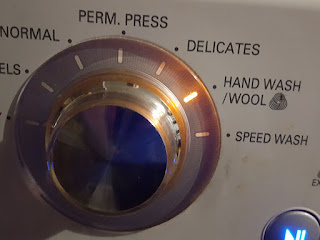 Tried "Hand Wash" setting. Saw no hands. Is machine defective?
at 7:18 PM No comments: Links to this post

I supported Richard Nixon right up to the moment he resigned, and a little bit after. I simply could not believe that he was the criminal that people were portraying him as, and if he was, well it was ok because he was better than McGovern, and anyway liberals were all hypocrites who were just trying to get me to admit I was wrong.
Youth and inexperience made me wrong and foolish. These are crimes of which we have all been guilty, but we're supposed to learn our lesson.
Today my few remaining Trump supporter associates are doing the exact same thing. Some are young and will learn better. Some are old and simply refuse to learn.
Stubborn pride goes before a very hard fall. Trump is a criminal and supporting him is just like supporting Nixon. Isn't it better to admit the mistake before history rubs your nose in it?
at 7:34 AM No comments: Links to this post

The half-life of the common pyrex food container appears to be about one Earth Standard Year (ESY).
To measure this, a dozen such containers, suitable for packing leftovers to lunch, were purchased last January. Six remain.
The mechanism of the disappearances remains a mystery, although in two cases percussive impact with tile floors were observed; the mechanism appears to be gravity catalyzed by a feline interaction in one case, and in the other a human catalytic agent (this author) associated with either a deficiency of caffeine (C₈H₁₀N₄O₂) or an excess of ethyl alcohol (C2H5OH) or both. The disappearance of the rest remains an unsolved mystery.
I am writing to apply for a grant to continue this experiment. An additional half-dozen containers would be purchased, and means developed to observe their expiry.
Please advise.
at 7:21 PM No comments: Links to this post

They have landed in Seattle 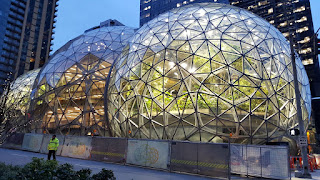