Some Are Cats, Some Are Dog

I'm tinkering with this improper little essay, so don't expect it to be the same over time.
---
Many people are dogs. They feel the need for a master and they are not comfortable without someone to tell them what to do. They are especially not comfortable with those outside the pack.

Others are cats. We cats tolerate dogs: they are useful and amusing. We don't especially feel the need to have a master although we'll let someone think so if they feed us and shelter us.

Humans often misunderstand the situation by focusing on the small size of house cats, compared to domestic dogs. In nature, the largest land predator is the cat.

Plus: cats scream during sex. Dogs just look guilty.
at 8:36 AM No comments: Links to this post

Monday I shall be working for you for free, if the #Trumpshutdown continues. No need to thank me. The fascists set this up by refusing even to vote on the bipartisan DREAM bill, and I don't mind a bit of sacrifice on behalf of 700,000 people who came here as children.
The Trump supporters among my immediate family unfriended me because they couldn't stand being contradicted, so I can't ask them at what point a 5-year-old child (now a DREAMER) becomes a criminal: when her mother approaches the border or immediately after?
Under what possible theory do they think that 5-year-old should say, "Mommy, I am leaving you because it's illegal to enter the United States."
That's what we're talking about. That 5-year-old grew up here and is now 25 and working somewhere, and my fascist friends and families want to send her back to a nation she never knew, to be absorbed. How she would then live we can only imagine. On this basis alone I call Trump supporters cruel.
This is all on purpose. Trump cancelled DACA six months ago and the Republican leadership in Congress refuses to allow a vote on DREAMER reform - it would pass if they allowed a vote, but they are cruel people. They should have re-authorized CHIP four months ago, but they are cruel people. Now they are holding CHIP hostage to their DACA cruelty and demanding the Democrats (and a few Republican allies) to make a Sophie's choice: CHIP children or DACA children.
It is a fine distraction from them picking your pockets and deflecting from Russia's continuing attack on America. We are losing the information war with Russia because our current leadership are fellow travelers.
My sacrifice is small, and I'll probably end up being paid anyway. Don't worry about me. I am content never to be deliberately be a part of cruelty.
What is the excuse of Trump supporters for their cruelty?

One of my SCA buddies is doing this. Pledge early to include YOUR coat-of-arms in the deck!! 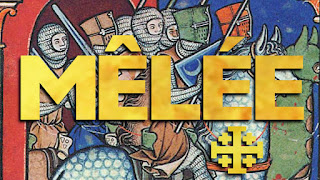 My job is answering questions 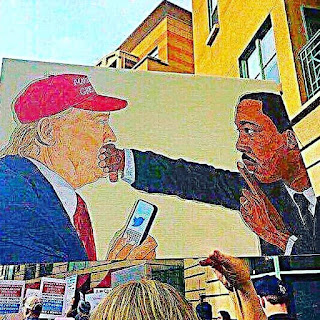 TODAY I LEARNED that while indeed you can launder a yoga mat on the gentlest cycle (the inaptly named "hand-wash") yet its appearance of having been gently spun dry can be deceptive.
I let it hang dry overnight, and then tried a "Yoga With Adriene" youtube. The standing technique were fine because the surface was dry, but when it was time to lie down, I discovered that spongy material is spongy.
Fortunately I did this at home, as I dislike going "EEEEP!" in public, not to mention displaying a soggy seat.
at 7:17 PM No comments: Links to this post