... are indeed well meant. Let's not deny that.

I signed up for the WSBA's Pro Bono and Legal Aid Committee (PBLAC) so I could be a contributor, not a complainer. Yesterday (Thursday Oct 30, 2008) was its new member orientation, followed by a regular meeting.

They are all well-meaning people, and I wish things went better. We met for two-and-a-half hours and did not mention a single measurable, meaningful target to be met within a defined time. That is to say, I saw no real plan. There *is* a huge plan; we had at least five pounds of dead-tree handouts in a 3-inch-wide binder. It defines a process that provides some helpful activities, no doubt, but by its very bulk and obscurity doesn't solve the problem of access to justice.


It's as if Boeing were to say,

"We need a better jetliner. We've been making lots of progress toward it: we've made some parts, we had a rollout event, et cetera. But a date for it actually flying? Hey, look at that shiney thing over there!"

This problem is not unique to the law-and-justice community.

However, if a private enterprise screws up, no-one should be crying except the shareholders, and they knew the risks. But charitable matters are different; people with limited choices rely on them to be effectual, and this makes it doubly wrong when they're not.

I'm familiar with PBLAC and its cousin, the Access To Justice Board, from over a decade of hanging around the Washington State Law-And-Justice Community. I've been struck with how carefully they tiptoe around actually stating the problem in measurable terms, defining a plan to solve it, and reporting on progress toward completely meeting the goals.

Instead, there are factoids ("X% of Washington's low income residents have such-and-such a need") but never facts ("a specific number of persons or cases have such-and-such a need"). Why this is, I can't say because the volunteers are uniformly well-meaning and the paid staff are nice people. It is entirely possible that, when you do the math in your head, there's just no way to solve the problem with the tools at hand:
It ain't gonna happen folks. And if we get hit with a Depression, it's doubly not gonna happen, as lawyers drop out of the profession, take minimum wage jobs, and default on the law school loans.

Now you can play with the numbers to get a more happy or less happy result. The point is, PBLAC and ATJ and the rest of the community don't run the numbers. They provide a lot of data, but not the really distressing information. Instead, they publicize the amount of work they do:
Any project that reports effort expended instead of progress achieved toward completion is about expending effort, not solving the problem.

If that last point (and the "forelock-tugging" bullet) seems a little cynical, it's because I'm really tired of the Lady Bountiful model of legal aid. I was raised poor. Without foodstamps, I wouldn't have teeth and without welfare I have close family members who would be dead. Charity is important, but empowerment is more important.

Certainly I'm going to put in a lot of work on this committee, but holy cow!
at 7:40 AM No comments: Links to this post

8 Ways To Check Up On Charities

You want to direct your charitable work and dollars into those that are effective. Sad to say, there are reports of fake charities; on the other hand, a charity with high administrative costs may just need your hands-on assistance to turn itself around. Do the research and help wisely.

The 10 Most Outrageous Opening Lines in Literature

...in other words, 10 books that you've got to read at least the first sentence of!
Top 10 List Courtesy of Michael Conor Sullivan
read more | digg the list
at 10:18 PM No comments: Links to this post

Yesterday, a bunch of us living here in Seattle's Belltown neighborhood met at a coffee shop to talk over the issues, then walk to the county offices to cast our absentee ballots in person.

This freed us from the uncertainties and vagaries of election day. We all work, so Election Day is always a problem. Some of us take time off to be poll watchers or polling place inspectors, and usually that's some place other than our home precinct.

But throwing an absentee ballot into the mail is no fun; it lacks the drama, civic commitment or magic of assembling as citizens to cast a secret ballot. 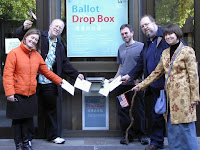 No problem! We organized our own Early Voting Party and it worked great! We were open to all persons of any political preference, but we had several things in common, among them a love of coffee and a desire to make our votes count.

We had some fun, maybe made a few new friends, and decided to meet again to party, maybe do some politicking, maybe just have fun. You can too - why don't YOU try an Early Voting Party?

(A shout-out and a thank you! to the staff at the Centennial and the people at the Olympus who supported this nonpartisan effort - it's really cool to build community!)
at 9:31 PM No comments: Links to this post